So this talk is really an anti-design designer talk. It was borne out of years of frustration from hearing speakers tell people — at least in the US — that all designers are bad, that they’re contributing to a larger problem, without really implicating the larger systems at play. This means people walk away feeling pretty terrible about the talk they just listened to, and don’t feel empowered to do much about what they see as problems themselves.

So this talk won’t do that. Instead, we’re going to reflect on the ways that structures and systems have failed us, because they’re built on an artifice of bad decision decisions. We’ll interrogated those decisions from the lens of the Designer’s Share of the problem.

In his influential book, Victor Papanek diagrams for us the Designers Share of the Problem which is only a sliver of the real problem. Of course, for most of us designers we think the opposite is true of this diagram. That if people just listened to us more, we’d often solve the problems. One part of this assumption is indeed true, that designers should be heard from more — not less — and I don’t mean in pithy tweetstorms that only encourage the rest of us to post our own. But rather, heard from quietly through the design of better experiences. What do I mean?

What the Pandemic wrought

It occurred to me when we started seeing arrows on supermarket floors in the US that service design had missed its moment. No service design book is equipped to prepare you for the world melting down, all of the dystopian movies you watch didn’t give you the tools to design ourselves out of crisis. Why? Because service design — at least in the US — is largely the domain of consultants trying to use post-it notes to convince folks to change stuff, but no one in the room has the power, the political capital, or the will to really change much of anything.

So where does that leave service design? Or interaction design? Or user experience? Will we be having the same boring UI vs. UX conversations in the next decade?

The problem with most design frameworks is the presumption of good. There’s an undergird of all design that implies that everyone is doing their best and implores us to assume good intent. The problem is, bad actors exist everywhere. These bad actors are not interested in your beneveloence, they’re concerned with their warped world views or heavily invested in their own myopia. They’re designing experiences for the people they know, the circles they live and work within and they’re pretty unconcerned with anyone else.

How does this manifest itself?

Transition states aren’t owned explictly by anyone. What are we talking about? The liminal experience between interactions. Why do we still receive emails from a company we made one purchase from over a decade ago? A failed closure experience. Envision a universe where the right of a customer to break up is embedded in the process? Instead of a sales funnel that’s aimed at growing repeat customers, what if our goal was simply to provide the best experience one time and not tracking whether they’ll come back or not?

I realize this all signs a bit like heresy. After all, you’re probably in the business of growing clicks, views, eyeballs, or whatever else. Here’s the problem, most of your customers aren’t coming back no matter what you do and all of the reasons you presuppose they’re not are probably wrong, too.

The pandemic turned these liminal interactions on their heads, too. Overnight, we saw shops refusing to accept hard currency, restaurants being forced to leverage third-party systems to deliver food since they weren’t equipped to manage it, people remapped their habits and in many cases, stopped working in-person. There was no way to service design our way into this scenario, besides in some abstract war game or simulation event. Simply put, all of our assumptions were wrong and we’re still dealing with the fallout. 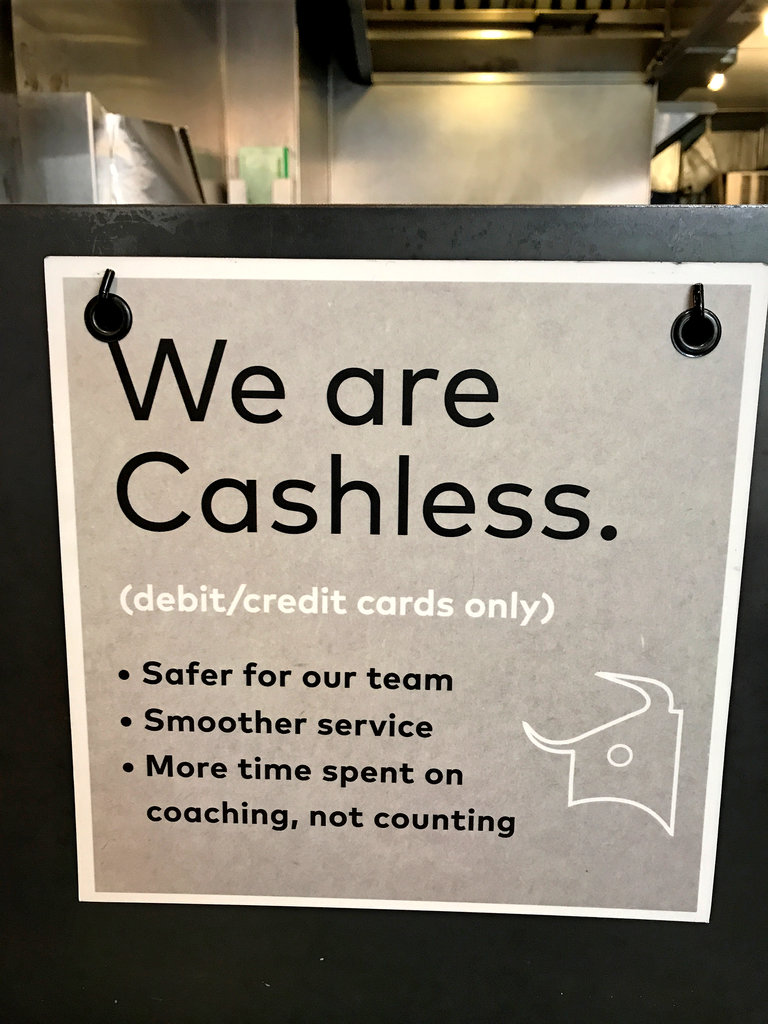 It’s worth noting that the examples I’ve presented above probably don’t resonate with you here in Norway. Local and EU laws are totally different than what we have in the States, and so any of you who visit the US semi-regularly or have family there will note how backwards we are with regard to many of the services and systems that you enjoy here like health care, worker protections, data privacy laws, and a host of other issues.

But while I’ve talked a lot about the consequences, let’s talk a little bit about the vision for what could make these things better? To do that, we’ll look at two industries that I don’t imagine interaction designers are spending much time contemplating — bar pilots and integrity engineers.

No, not those kinds of pilots. Bar pilots is master navigators whose help navigate ships through tricky waters based on their experience navigating ships. In this example, the Columbia River Bar is one of the world’s most trecherous stretches of water anywhere.

What can designers learn from bar pilots? They know the terrain because they’ve been there before. I read a quote that said “bar pilots can’t afford to be wrong.” Why? Because some 2,000 vessels and 700 souls have been lost on the Columbia River bar. That’s a lot more lives than your last retweet and design twitter still hasn’t cooked up a controversy this significant.

I imagine there must be some amount of ego lost in knowing someone else is going to jump onto your ship (and jump off) to help you navigate waters, and the whole thing sounds a bit crazy from the outside looking in. But think about the implications of having a system setup that says “look, you might be trained but you’re not trained for this terrain and the unpredictability it’ll toss at you. So we’re sending help to ensure you make it out.”

People keep asking me what I mean when I say “Consequence Design” and that’s precisely what I’m talking about. There has to be a way for us to get to the crux of these important experiences without spending more hours in hamhanded conversations about what UX is and what UI isn’t. I’m not asking for a bar association for designers — that’s the last thing we need is more gatekeeping — but we do need an acceptable standard for what the rules of the road are, in accordance with whatever flies in the country we’re operating in. It’s long overdue.

Offshore integrity engineers have a complex job, but the high-level is simple. There’s a recognition that there’s a lot of potential risk and loss from offshore oil and gas rigs (as well as wind farms and such alike) and these folks have the job of managing that structural integrity so that there’s less loss. Turns out, even if this job is done well there are still going to be oil and gas spills because that’s the nature of the business. The gig here isn’t to prevent them from happening — unless you know of a weather control device I’m not aware of — it’s to minimize the damage that’s caused when these events do happen and to ensure that they’re rarer than if this wasn’t in place.

Service design, interaction design and the like presuppose that every use is essentially equal. It gives the (false) impression that we’re all working through the doors the same ways and that we’re valued by the service provider similarly. This doesn’t account for all of the fast-lanes we build within service experiences to segment customers based on their desirability. While we’ve all likely designed personas and talked about who we think our audience is, the reality is a lot more diverse and complicated.

Service blueprints do not account for this complexity, nor do we ever see the design of backstage/frontstage interactions for the liminality within complex interactions. We need a cadre of designers — master designers — who are trained in things besides just design. Policy analysts, lawyers, accountants, health care and more. These skillsets coupled with practitioner level experience actually building things can help us better build more resilent services and systems. It’ll take work, imagination and a lot of buy-in. But the status quo isn’t the future of the craft.

While Trust and Safety are part of social media mitigation strategies, the issue is right now we’re still being very reactive to the risk and harm wrought by bad service & interaction design because best practices are focused solely around design and not the stuff that happens after the sites go live. Not to mention kiosks, self-checkout lanes, or other integrated systems that are designed offsite and foisted both on users and the companies that have to use them.

The Hidden Cost of Everything

So many important parts of the design experience simply aren’t measured, so we ignore them or conflate them with other parts of experiences.

I ordered a pizza a few months ago, but rather than pick it up as I normally do, I had it delivered. Last week, I ordered a pizza. Normally, I pick it up, but I was feeling especially tired last week so I had it delivered. The post-COVID world has done one significant thing for me and that’s made me super aware of how poorly everyone doing service work is generally paid. As a result, I’ve been extremely liberal about how much I tip. I don’t think I was particularly bad at tipping before, but now where I’d maybe tip a $1 at the ice cream shop, I’ll just double the price of the ice cream as a tip. Partially because I can afford to do this, but also because of all of the money I save by not playing anymore skeeball. (This is mostly a joke.)

Anyway, as my pizza arrived and I tipped the driver in cash she seemed surprised and said thanks. Then she texted me again and I got an alert that she was working for DoorDash before her text to again say thanks you and wished me a good day. Here’s the thing, I ordered from a local independent pizza shop.

Part of why I didn’t tip the driver through their website is because I wanted to pay the driver cash, since I wasn’t sure how their pay arrangement worked and whether they’d be cashed out from my credit card payment at the end of their shift. Here’s the thing, I understand there are costs to all these things. But certainly in Finland — and probably here in Norway — this extends to sites like Wolt too, that are third-party layers that assume part of the interaction design of services without us knowing we’re often in a relationship with someone else.

From the start of the so-called sharing economy, I’ve always wondered about the precarity of it all. I mean, just thinking about strangers being in my car and perhaps puking would make me break out into hives. On the other hand, I have been in situations financially where being able to use a resource at my disposal — my car — and put it to work for me immediately so that I could balance out of a rough patch would have been quite helpful at different stages of my adult life.

What does any of this have to do with service design? With designing interactions? How do we make sense of the spaces we find ourselves? What is the designers share of the problem and how do we embrace our role?

Apologies for typos, this is just raw notes